Why Not Teamwork Across Generations?

"When open-to-experience people find each other across generations, we can see the creative power of teamwork. The multi-generational team becomes an idea generator. It wasn’t just one generation that put Curiosity on Mars."

The resentment against Baby Boomers is real. I hear it in two contradictory arguments: (a) They are staying on too long in the workplace and denying younger people jobs. And (b) They are retiring and depleting Social Security and Medicare. I hear it when some people in the military say, “You people messed up the Army during Vietnam”. Then there is the young boss (surrounded by even younger acolytes) who makes the in-group the working team rather than the team as everyone in the workplace (including the oldest workers). And then there are the radio interviews with the YPs.

For the past few years our local (Akron, Ohio) newspaper and radio stations (especially the NPR affiliate) have continued to re-tell the story that Akron can only be saved by the YPs – the Young Professionals. The reporter always interviews the YPs at the same high-end bar downtown – the kind of hangout we are reminded that Akron must have to attract the YPs (and salvage a future for the city). I get the feeling that the reporter (younger than a Boomer but older than a YP) wants to slip into their scene, fantasizing that the YPs will take him in as one of their own. 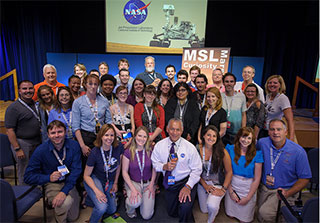 The interviewer leads the YPs into talking about how they have the ideas to save Northeastern Ohio. The reporter “feeds” the YPs with compliments and with comparisons between the YPs and the Baby Boomers. The reporter points out that the YPs were not raised on Ozzie and Harriet and Leave It to Beaver. Such television programs did not shape their view of neighborhoods and city life and the family and the roles of mother and father. They don’t have the Ozzie and Harriet view of life. They are not the Leave It to Beaver Generation.

In our family – I don’t remember that either Ozzie and Harriet or Leave It to Beaver was the center of our television watching. Certainly neither program became our model for how to live or how to view the world. As working people, our parents did not look or act like the parents in the two programs. (Our Dad had two jobs and our Mom had one job outside of the home.) Usually on Saturday evenings, our family (my brother and I were the kids) drove over to my grandparents’ house (my Dad’s parents) on Carroll Street near the University of Akron to watch The Honeymooners or Gunsmoke or Red Skelton – not the same kind of television as Ozzie or Beaver – not the same world at all. I remember one of the funniest (eye-watering) programs we watched at home on our black-and-white TV was Ernie Kovacs and friends as the Nairobi (all “gorilla”) Trio. Again – not an Ozzie or Beaver world. 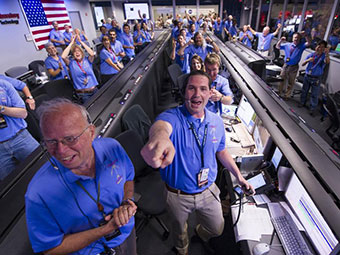 For our generation the television that demanded our special, serious attention was the coverage of space events. This is the television that influenced us and traveled with us into our adult lives, and I believe has stayed with us. We watched John Glenn’s flight in a tiny capsule – the first American to orbit the earth – before his landing in the ocean. We watched the 1968 Christmas Eve broadcast of the crew of Apollo 8 from lunar orbit: “In the beginning …” (That night I was preparing to go on active duty in the Air Force.) I thought of these scenes after I watched this summer’s NASA/IPL coverage of the landing of Curiosity on Mars. I saw the demeanor of the scientists and engineers in the control room. It’s been a long time since I have felt the excitement of a space mission. I looked at their faces. They were the faces of men and women of several generations.

Mixing generations – rather than marginalizing or segregating or ejecting any generation – brings benefits for everyone. For example, rather than high-end bars for YPs, I have always enjoyed the traditional British pub that attracts people of all age groups for animated conversations everywhere in the public house – at the tables, in the booths, and at the bar – both inside and outside – even out front on the “pavement” (sidewalk). I like the free and open sharing of ideas and the good-natured challenging of ideas. 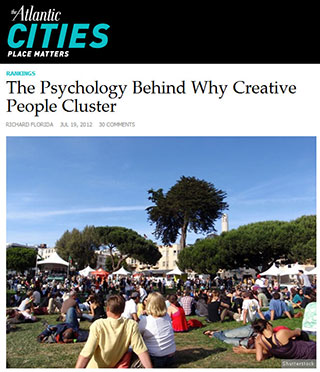 Richard Florida (University of Toronto), author of The Rise of the Creative Class, has written, “I’ve long noted how openness to new people and ideas can power innovation and economic growth.” Florida states that studies by Jason Rentfrow of Cambridge University (“The Open City” and “The New Geography of Personality”) back up his own research concerning creativity and innovation. Florida looks at urban life, geography, business, and economics. Rentfrow looks at psychology and personality. Their teams ended up conducting research together across academic disciplines. Rentfrow has found that a personality that is open to experience is associated with creativity and innovation. Individuals with this personality are not afraid of change. Perhaps personality is more important to creativity and innovation than age or generation. http://www.theatlanticcities.com/neighborhoods/
2012/07/psychology-behind-why-creative-people-cluster/2243/

Akron has many neighborhoods (actually small town centers) as well as coffee houses, dance studios, art galleries, bars, restaurants, musicians’ hangouts, jazz clubs, libraries. It’s just too easy for reporters meeting at one high-end bar downtown to claim that they have discovered the one group that will save Akron and Northeast Ohio. Where do people meet to talk? Where do creative, innovative people gather together? Does age define (or restrict) their creativity and sense of innovation? In Akron, where are innovative, creative people open to experience and new ideas – regardless of age?

A number of years ago, Maxine Hong Kingston, editor of Veterans of War, Veterans of Peace, started a veterans’ writing community in Northern California. These veterans represent many generations and together have served in many wars. In their writing community, there is no segregation of generations. Ms. Kingston recalls, “As the writers became skilled in knowing others’ points of view, they enlarged the definition of veteran.” So over the years, individuals whose war experience was as peace activists also joined the group. “Wars affect all of our lives,” Ms. Kingston explains. To paraphrase her writings, we must harvest our conversations. We must listen deeply to what each other is saying and writing. 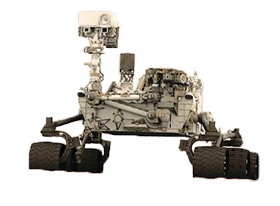 I believe we should apply Maxine Hong Kingston’s ideas to our own civic community and expand our thinking of generation. When open-to-experience people find each other across generations, we can see the creative power of teamwork. The multi-generational team becomes an idea generator. It wasn’t just one generation that put Curiosity on Mars.

1. Dr. Richard Florida, Senior Editor at The Atlantic and Director of the Martin Prosperity Institute at the University of Toronto, author of eight books and numerous articles. His recent book is: The Rise of the Creative Class Revisited and go here for more about Dr. Florida: http://www.creativeclass.com/richard_florida

2. Dr. Jason Rentfrow, Lecturer in Psychology, is an Associate of The Psychometrics Centre at the University of Cambridge, and Senior Lecturer in Psychology in the Department of Social and Developmental Psychology. He is Fellow and Director of Studies in Social and Political Sciences at Fitzwilliam College.
http://www.psychometrics.cam.ac.uk/page/279/jason-rentfrow.htm and
http://www.psychol.cam.ac.uk/people/pjr39@cam.ac.uk 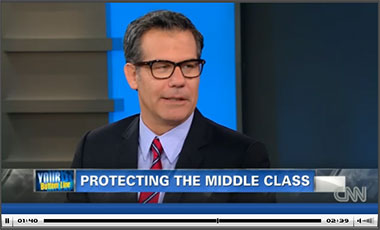 "Despite conventional wisdom that older workers who are delaying retirement are squeezing younger employees out of a jobs, a new study found no support for that thinking – and even some evidence that the older workers maybe helping the next generation."

'"Our estimates show no evidence that increasing employment of older persons reduces the job opportunities or wage rates of young persons," according to a new study from the Center for Retirement Research at Boston College.'

'“The theory may sound plausible, but the data do not support it,” the research determined.'

"The paper, co authored by Alicia Munnell and April Wu, analyzed data from the Census Bureau from 1977 to 2010." (more)

Go here for the full article online: "Older employees not crowding younger ones out of work, study finds" by Frank Witsil, The Detroit Free Press, 11 Oct 2012; or download PDF and a PDF of the study itself.